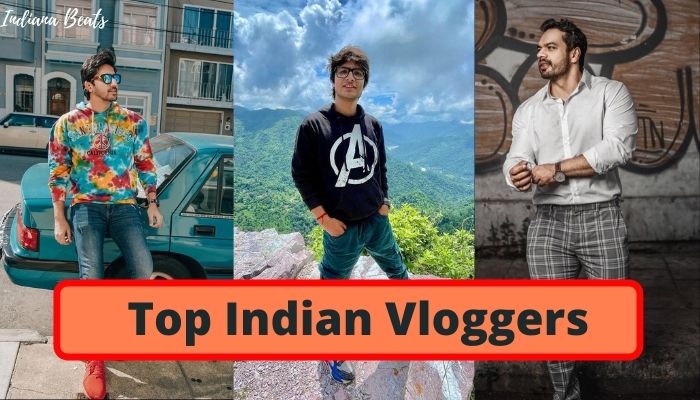 After being launched in 2005, Youtube has more than 2 billion registered monthly logged-in users and 5 billion YouTube videos are watched every single day. Its popularity is increasing rapidly and many creators are joining this platform.

Many people from worldwide are joining youtube. In India YouTube has the largest active population, with more than 467 million users Many Indians choose youtube as their career, In India, Most subscribed YouTube channels are of Companies but many individual creators make their presence on this platform.

Nowadays YouTubers are uploading videos in many categories but the most popular video types are Vlogs, Gaming, and Comedy videos people also like Unboxing and Educational videos. From these categories, Vlogs are the most loved videos on youtube so many vloggers show their daily life activities to the audience.

Many creators publish their daily life activities in form of videos on youtube. Here is the list of top vloggers who are famous on youtube in India.

Sourav Joshi is an artist who gained fame for his wonderful sketch and art pieces. He owns two youtube channels Sourav Joshi Arts and Sourav Joshi Vlog. On his art channel, he has 3.64 million subscribers. After getting fame in art and sketch making he started his vlog channel during the covid 19 lockdown in 2020. On his vlog channel, he has 16.5 million subscribers, and hence he is the most popular vlogger in India. Sourabh shares his daily life activity with his family and friends in his vlog. His cousin Piyush Joshi and his dog Oreo is the very interesting part of his life around which he shoots most of his vlogs.

Sourav has 3.5 million followers on Instagram. Recently he appeared in the new song of Voilà! Digi “Mauja” with Anicka and gets a good response from the audience.

Gaurav Taneja, popularly known as Flying Beast is an Indian YouTuber, Pilot, and Fitness enthusiast. He shares his daily life routine and stories with the audience. His vlogs mainly consist of his activities with his daughter, wife, and other family members. He started vlogging in 2017 and now he has 7.67 million subscribers on his youtube channel. Gaurav Taneja has two other channels FitMuscleTV and Rashbhari Ke Papa with 2.1 million subscribers and 1.3 million subscribers respectively. Gaurav is a fitness freak and shares his fitness tips on his channel FitMuscle TV. Rashbhari ke Papa is the gaming channel where he plays various games like GTA V, Valorant, PUBG, etc on the live stream.

Flying Beast has 3.4 million followers on Instagram. Gaurav’s daughter is very cute and funny which attracts people to watch his vlogs.

Gaurav has 2.3 million followers on Instagram. People love to watch his travel vlogs.

One of the most controversial yet the most loved vlogger Gauravzone has 4.17 million subscribers on Youtube. Gauravzone shares his day-to-day life activities, travel, automobile, and market-related vlogs on his channel. He is also posted some original song videos on his channel. He has a very famous dialogue “Jigar ke Challe, tere Bhai ke balle-balle” which is very often used by his followers.

Gauravzone is also one of the most controversial vloggers on YouTube. Recently he tied his dog to balloons and blew it away for which he got arrested and later he apologise.

Nikhil has 1.4 million followers on Instagram. His vlogs are real and fun to watch as it doesn’t seem as if he is intentionally acting in them.

Every vlogger in the above list has their own specialty Sourabh Joshi is famous for entertaining with childish activities, Flying Beast gives a tour of his daily life and Mumbiker Nikhil is famous for his travel vlogs. I hope I have covered the top vloggers in India, If you want to add me some more names then you can suggest them in the comments below. I hope you guys like this, share this article with your friends. Thank You!

Don’t forget to share and Subscribe to our Newsletter for regular updates. Thank You so much for visiting us.