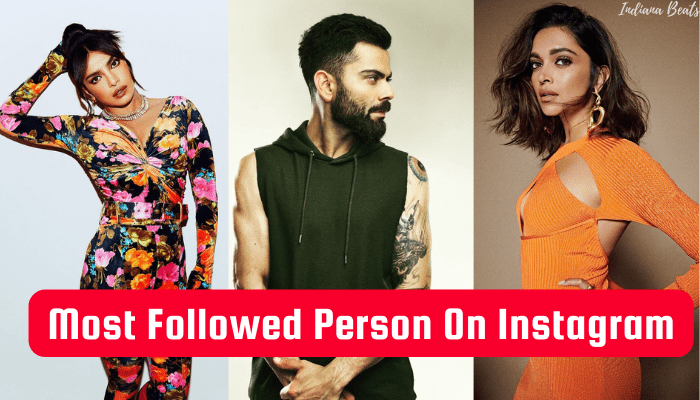 Instagram is one of the most popular social media networks worldwide. It has kept us addicted ever since it launched as a photo-sharing app. This platform has 1 billion monthly active users and 500 million daily Insta stories users (surpassed Snapchat with 160 million users in 2017). 65 percent of Instagram users are aged between 18 to 34 years. This means that it is making its presence among the major part of the young generation. In this article, you will know about the most followed person on Instagram in India.


Instagram is basically a photo-sharing social network service that allows its users to take pictures and edit them with inbuilt filters. Over the last decade this app has evolved as a place to keep up with old friends; an online shopping portal; a place to share creative short videos and informational IGTV videos.

In India, this photo-sharing social media has 180 million active users. And when 180 million people are using this platform then the question that comes to our mind is “Who has the most followers on Instagram in India?” So, here is the list of the Top 15 Most Followed Indian accounts on Instagram.

Followed by 182 million users Virat Kholi is the most followed person on Instagram in India. Virat is the only male in the top 5 list of highest followed Indians on Instagram. Kohli is an Indian Cricketer and former Captain of the Indian Cricket Team in all formats. He is very famous for his batting style and aggression on-field, people also like him for his good looks, fashion style, and fitness skills. Virat Kohli has 182 million followers on Instagram. He was the first Indian to cross the 50 million and 100 million mark on Instagram.

Virat Kolhi has the most followers on Instagram in India and it seems like no one can beat him in the coming years due to their immense popularity worldwide.

With 74.2 million followers Priyanka Chopra is the second most followed person on Instagram in India. Priyanka is an Indian actress, singer, movie producer, philanthropist, and the winner of the Miss World in the year 2000. She is one of India’s highest-paid and most popular celebrities. Priyanka Chopra also worked in Hollywood movies and Television Shows. She is also the producer of the 10th highest-grossing Marathi movie Ventilator. She has also experienced working with top Hollywood actors like Dwayne Johnson and Seth Gordon. Priyanka worked in the popular American television series Quantico.

With 69.1 million fans Shraddha Kapoor is in the third position in the list of highest followers on Instagram in India. Shraddha Kapoor is an actress and singer who works in Hindi films. She is the daughter of famous Bollywood actor Shakti Kapoor. She made her acting debut with a brief role in the 2010 heist film Teen Patti and after that, she gave many super hit movies like Aashiqui 2, Ek Villian, Baaghi, Half Girlfriend, etc. Her movie ‘Saho’ with Telugu Superstar Prabhas got a huge success. Shraddha mostly posts her daily life photos and behind the scene videos on Instagram.

Neha Kakkar is an Indian Singer. She appeared in season 2 of the television reality show ‘Indian Idol’ in 2006. Neha is famous for her unique voice tone. She gave the superhit songs like Kala Chashma, Nikle Current, and Dilbar. After her huge success in the music industry, she became the judge of the 10th and 11th seasons of the Indian Idol. Her song with Yo Yo Honey Singh “Kata Laga” was liked by the audience. Neha has 67.7 million followers on Instagram. Neha’s Instagram account is full of singing videos and photos. Now she also posts reel videos on her account.

Narendra Damodardas Modi (Narendra Modi) has 63.5 million followers on Instagram. He is an Indian politician and serving as the 14th and current Prime Minister of India since 2014. He is also known as the digital Prime Minister of India because he is very active on all of his social media accounts. His video in which he was feeding a peacock in his garden was viral on Instagram.

The Instagram account of Narendra Modi has videos of his political rally and other official events of the Government of India.

Akshay Kumar has 59.6 million followers on Instagram. He is an Indian actor famous for action and comedy movies. Rajiv Hari Om Bhatia (professionally known as Akshay Kumar) made his Bollywood debut in 1991 and now worked in 61 Bollywood movies. His Instagram account is full of fitness videos and behind the scene photos.

Alia Bhatt is an Indian actress and singer. She made her Bollywood debut in 2012 in the movie Student Of The Year but appeared in the movie Sangharsh as a child actress in 1999. Alia Bhatt is now followed by 59.2 million users on Instagram and comes in the eighth position in the list of highest followed Indians on Instagram. Mostly, Alia shares her own photos but sometimes she also posts travel videos and fashion tutorials.

Jacqueline Fernandez is a Sri Lankan-born-Indian actress, she is a former model and the winner of the Miss Universe Sri Lanka in the year 2006. In 2009 she made her Bollywood debut with the movie Aladin and since then has made a place in Indian Bollywood fans. Jacqueline is also known as the Jacq of hearts in Indian fans. Jacqueline has 58 million followers on Instagram. She was also a famous Tik Tok star in India when TikTok wasn’t banned. Now she posts short videos on Instagram Reels.

Spouse of Indian cricketer Virat Kohli and Bollywood Anushka Sharma has 57.1 million followers on Instagram. Anushka is an Indian TV actress and film producer. She is one of the most popular and highest-paid actresses in India. These days Anushka became very active on social media. Anuska and Virat together known as “Viruska” and their photos are very popular among the Indian audience.

Popularly known as Bhaijaan, Salman Khan has 50 million followers on Instagram. Salman is an Indian actor, producer, singer, and television personality.  He is one of the richest actors in India with a net worth of more than $310 Million. Salman’s popular movies are Wanted, Bajrangi Bhaijaan, Bodyguard, and Ready. He is the host of the most famous Indian TV Show Bigg Boss.

Disha Patani is an Indian actress. She played the leading lady role in the Bollywood sports film M.S. Dhoni: The Untold Story and the action film Baaghi 2. Disha also worked with Jackie Chan in the movie Kung Fu Yoga. Disha Patni has 48.7 million followers on Instagram. She was first recognized as the girlfriend of Tiger Shroff. Disha is famous for her hot and bold photos on Instagram.

Want to Get More likes/followers? Then read Best Time to Post Updates On Social Media

Kriti Sanon is a Model and Bollywood actress. She has 46 million followers on Instagram. She made her Bollywood debut in 2014 with Tiger Shroff in the movie ‘Heropanti’ and after that, she has many successful movies like Bareilly Ki Barfi, Dilwale, and Luka Chuppi.

Varun Dhawan, son of David Dhawan, is an Indian actor. He is one of India’s highest-paid celebrities, he has been featured in Forbes India’s Celebrity 100 list in 2014. Varun Dhawan is also considered the future Salman Khan of Bollywood. He is popular for his action scenes and romance on Big Screen. Varun Dhawan has 40.1 million followers on his Instagram account.

Famous for his weird dressing style, Ranveer Singh Bhavnani has 38.4 million followers on Instagram. Ranveer Singh is an Indian actor and television personality. He made his mark through movies like Ram Leela, Bajirao Mastani, and Padmavat. His recent movie 83, in which he played the role of former world cup winning captain Kapil Dev was very successful on the box office.

I hoped I covered all the Most Followed Person On Instagram of our country. If I missed someone please do mention them in the comment section below. Most of the above-mentioned persons are top Indian celebrities. 13 out of the above 15 are Bollywood celebrities and 10 out of 15 are females. Hence we can say that the most followed person on Instagram in India is dominated by female Indian celebrities. I hope you guys like this, do share which celebrity you follow on Instagram in the comments. Thank You!

Don’t forget to share and Subscribe to our Newsletter for regular updates. Thank You so much for visiting us.

21 thoughts on “Most Followed Person On Instagram in India”