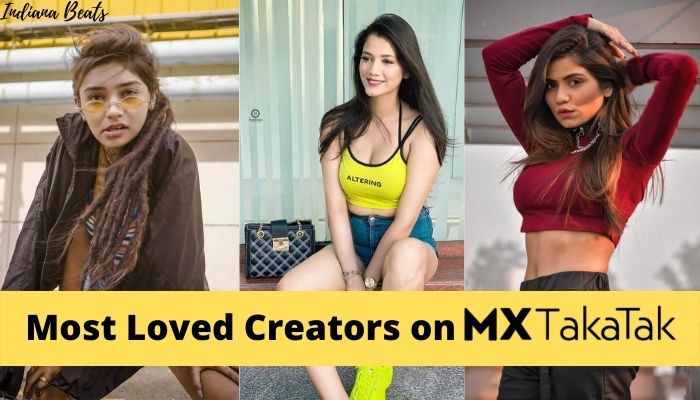 MX TakaTak is not famous as TikTok but many teens and twins are interested in this app after the ban of TikTok. Many digital creators and influencers have joined this platform just after its launch and now they are getting fame. In this article, you will know about the Top MX TakaTak creators and their fame.

MX TakaTak is a fun video maker and dialogue dubbing app developed by MX Media & Entertainment that allows the users to make short-form videos and funny dubbed videos. Not just limited to these, the Indian version of the TikTok app also provides its users dubbing of dialogues, customization of videos, the addition of music to all types of videos, be it Comedy, Gaming, Memes, or Food!. You can easily recreate the best scenes from your favorite movies and the hook steps of hit songs by using the Mx TakaTak app.


The most famous short video app after the ban of TikTok is Mx TakaTak. It is the home to the top digital creators of the country, MX TakaTak is the platform that will help you nurture your talent in creating videos and make you discover your audience.  It has a very similar design and features to TikTok and this app is very easy to use. MX takatak has more than 100 million downloads and 4.1-star reviews out of 5 after being reviewed by more than 600k people on Google Play Store.

MX TakaTak is the most popular short video app in India. The question that comes to our mind is which creator has the highest number of followers on MX TakaTak? So, here are the names of the most popular digital creators and influencers of the MX TakaTak app.

Nisha Guragain is famous on TikTok for her famous acting and lip-syncs skills. She mostly posts lip-sync videos on the trending hashtags. She has very fewer duets but is popular due to her acting skills. Nisha is a rising digital star in India.

Nisha is also known as Angel Nishu which is her nickname. She is the viral creator of TikTok and is popular for her expression videos. Nisha has 24 million followers on TakaTak and 367 million likes. Recently she appeared in two Punjabi songs Taash De Patte and Nakhre. She was also a part of Mx TakaTak Fame House. Nisha has 6.7 million followers on Instagram.

Followed by 23.7 million users Ayush Yadav is a popular Mx TakaTak creator. Ayush is a Model, Influencer, and YouTuber from Mumbai, India. He is known for his comedy and lip-syncs videos on the Mx TakaTak app.

Ayush makes videos with his friend Saloni Mittal which are very popular among their followers. They both together make very lovely content for his fan following. Ayush Yadav is very talented and has an amazing personality. He has 3.27 million subscribers on youtube where he posts vlogs, comedy, and prank videos along with some sketch videos. His Instagram account has 2.2 million followers.

Yashi Tank is an Mx TakaTak star, Influencer, and Model who is well known for her short lip-sync videos on the MX TakaTak app. She has a massive fan following with millions of followers across social media platforms. Yashi makes amazing videos with his friend Suraj Pal Singh.

Yashi’s followers enjoy her comedy and acting videos. She has 23.5 million followers and 166 million likes on Mx TakaTak. Her Instagram account has 934k followers.

Garima Chaurasia is popular as the bohot hard girl on TikTok. She has 23.3 Million followers on Mx TakaTak and 362 million hearts. She along with her friend Rugees Vini created a video on Emiway Bantai’s Machayenge song back in 2019. This video made them viral on every social platform and ended up making them the star of social media overnight. Before that video, they are the lesser-known.

Now both of them are verified users of TakaTak and became popular Mx TakaTak stars. Garima also worked in the Punjabi song Mashallah which went viral and got more than 15 million views on youtube. She appeared in the song Tattoo which also got 10 million views.

Saloni Mittal is a popular model and influencer from Gurgaon, Haryana. She is very popular for her lip-syncs and comedy videos. Saloni and his friend Ayush are very cute couples and popular creators on MX TakaTak.

Rugees Vini is a famous Indian digital creator, model, and influencer. She became famous by making a short dancing video on the Bohot Hard rap part of Machayenge with her friend Garima Chaurasia. She is now creating videos on the TakaTak app with 22.2 million followers and 225 million likes.

Sofia Ansari is an Indian digital star who is well-known for producing brief lip-sync and dancing videos. She has a gigantic fan following in India and has massive followers across different social media platforms. Sofia has 21.9 million followers and 333 million likes on Mx TakaTak. She is famous for her hot and bold videos. Her Instagram account has 8 million followers.

Lucky Dancer has 21.8 million fans on TakaTak. His real name is Arhan Khan. He is popular for his dancing and lip-syncs videos. Lucky’s video with Arihfa Khan is very popular and there is a rumor that they both are in a relationship. Lucky has 266 million likes on his videos. He is 20 years old and belongs to New Delhi, India.

Vishwa Rathod is also known as Wish Rathod, she is a model and social media influencer. She is popularly known as a tattoo girl for having beautiful tattoos on her body. She got a huge fan following after some of her videos went viral. Vishwa makes dance and lip-syncs videos.

She has 21.6 million followers and 165 million likes on Mx TakaTak. She is a professional model since 2016 and worked with many brands and had very famous photoshoots. Her story is very inspiring for struggling models and actors. Vishwa Rathod has 3.3 million followers on Instagram.

I hope I have covered all the top most famous MX takatak creators. If I missed someone then please mention their name in the comment section below. We will update our article again so please subscribe to notifications for the latest updates about popular creators on MX takatak. Do comment on who is your favorite TakaTak creator and why he/she is your favorite. Thank You.

Must subscribe to our newsletter for all updates related to MX takatak famous star. You can also follow us on social media: