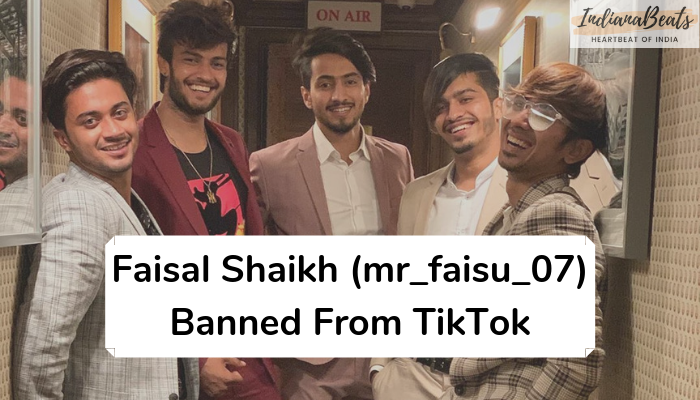 TikTok is a very popular app to create short videos. It is very popular among Indian youth. TikTok has more than 500+ active users. This app is a video platform that serves different types of videos among its users. On 8 July this app banned some of his popular users including Faisal Shaikh.


In India, this app is very popular and has a very good Indian audience. On 17 April 2019 TikTok is banned by the Supreme Court of India and removed from all the platforms. But after increasing securities and features this app was back on Play Store and other application platforms. Now on 08 July, the account of Top Indian TikTok user @Mr_Faisu_07 has been removed by TikTok. All videos of TikTok user @mr_faisu_07 have been removed by TikTok. Also his song with Jannat Zubair “Tere bin kive” has been removed from all the platforms by Zee Music Company.

The reason behind the ban of Faisu on TikTok

On 07 July TikTok star Faisal Shaikh makes a video with his friends (Team 07) on TikTok in which he says that “Maar toh diya tumne bekasoor Tabrez Ansari ko, Kaluski aulaad badla le to ye mat kehna Muslman Aatankwadi hai.” His friend Hasnain Khan and Sadhan Faroqui also made the same video. After saying this the video goes viral and when people noticed the started criticizing Faisal Shaikh (mr_faisu_07) and his friends.

Ramesh Solanki, Shiv Sena activist, filed a complaint against Faisu and his group “Team07” which is very popular on TikTok. They have nearly 4 corer followers on the app. Team 07 is the group of Faisal Shaikh, Hasnain Khan, Faiz Baloch, Adnan Shaikh, and Sadhan Farooqui. Mumbai Police has complained against all of them for spreading hate speech on social media.

Who is Tabrez Ansari?

Tabrez Ansari was a thief who was brutally thrashed by a mob on suspicion of bike theft and forced to chant ‘Jai Sri Ram. On 17 June the people of Kaddeeha village had beaten Tabriz Ansari on the charge of theft. On 18 June police reach the spot and arrested 11 people and saved Tabrez. He died five days later in judicial custody. Eleven people have been arrested in the case. Also, the Ranchi High court has accepted that mob lynching was the reason behind the death of Tabrez Ansari.

In simple language, we can say that Faisal Shaikh and his friends were banned from TikTok due to spreading hate speech on social media. His words can spread Communal riots that is why the account of Faisu is banned. That’s why someone said, “Think before you speak”. After all the incidents he posted on Instagram he said that “I am sorry if it hurts anyone, we don’t have any intention to hurt anyone.” Share this article to everyone so that they can know about this incident and let me know what you think in comments.