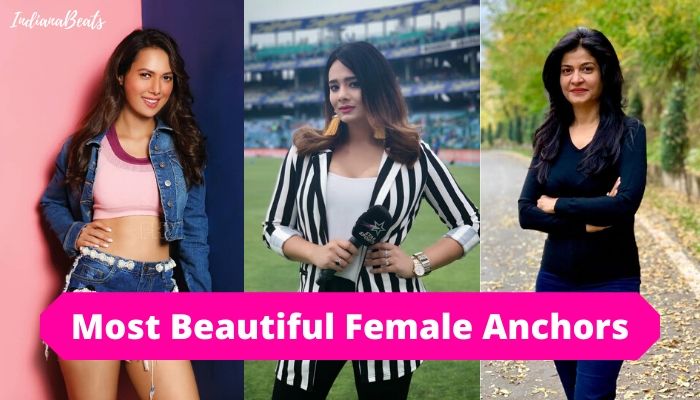 The news and media industry is one of the fastest-growing industries in India, so it’s no wonder that becoming a journalist is often a big dream for so many Indians. This industry is the fastest growing after the Internet revolution of 2015. Not only as a Television Publisher but Many News Agencies are also working on Social Media platforms like Facebook and YouTube. That’s why the demand for Male and Female Anchors is increasing in this industry.

Reading News is art and anchors are the artists. Here we have put together the top names of the most glamorous and beautiful Female Anchors in India who keep us updated on the world’s happening.

Here is the list of Top 10 Hottest Female anchors who are the heartthrob of youngsters. This list is completely based upon the popularity of these Female Indian Anchors. These Females are not just anchors, they are treated like celebrities.

Mayanti Langer is the most popular sports journalist in India. She is the wife of Indian Cricketer Stuart Binny. Mayanti looks gorgeous and hot and is one of the most famous sports journalists in the world. She started her journalism as a host of Zee Sports for football Cafe. Mayanti was an active member of her college football team in the USA. She was in her college football team and became a guest anchor for a broadcast of FIFA beach football and started her journey as the female anchor.

Mayanti was born on 8 February 1985 in Delhi. She married Indian Cricketer Stuart Binny in 2012. Mayanti is now the top-rated Female anchor of STAR. Currently, She is associated with Star Sports India and hosting the Cricket World Cup 2019 as the anchor of the English Language.

Rubika Liyaqat is the new name who got too much fame in a very short period of time as the anchor. She is from Rajasthan and is now very popular for organizing debates. Rubika married Naved Qureshi in 2012. She has one Son and one daughter.

Rubika started her anchoring carrier in 2007 and worked with famous news channels of India like News 24 and Zee News. In August 208, She joined ABP News Network and started hosting the Prime Time show Master Stroke at 9 PM from Monday to Friday.

During Lok Sabha Election 2019, Rubika along with Sumit Awasthi interviewed Narendra Modi. She has 1.2 Million Followers on Twitter.

Sonia Shenoy is one of TV’s most beautiful and glamorous news anchors who works with CNBC-TV 18. She was born on 24 June 1987 in Pune, India. For her education, she has got a degree in Finance and Economics from Narsee Monjee College of Commerce in Mumbai.

Chitra Tripathi is the most glamorous and hottest news anchor who works with Aaj Tak. She was born on 11 May 1986 in Gorakhpur, UP. Chitra holds a degree in Post Graduation in Defence Studies From Gorakhpur University. She wanted to join the Indian Army but later decided to be an Anchor.

Rochelle Rao is an Indian model, actress, and anchor. She was a contestant on Bigg Boss 9 in 2015. She also appeared in The Kapil Sharma Show as the character named ‘Lottery’. Rochelle Rao was born in Chennai on 25 November 1988.

Rochelle Rao is the winner of Femina Miss India (2012) and represented India at Miss International 2012 held in Okinawa, Japan (2012) where she ranked ninth out of 68 countries. After winning Femina Miss India in 2012 Rochelle was the host for season six of the Indian Premier League. After getting fame as the female anchor of IPL she has anchored various events and TV shows. Rochelle also participated in the show Khatron Ke Khiladi in 2014. She is also the finalist of the popular TV reality show Bigg Boss Season 9.

Rochelle Rao is currently playing the role of Chingari (Neighbour) in the popular comedy show The Kapil Sharma Show on Sony TV.

Ambika Anand is an Indian TV anchor and the editor in chief at NDTV Good Times, the lifestyle channel of NDTV. She was born on born 15 September 1980 in Chandighad. Ambika started her anchoring carrier with NDTV in 2002 and worked for their show India Business Report. After close to two years of working with NDTV, she went and worked for the Department of Communication of the International Labour Organisation, Geneva.

In December 2005, she rejoined NDTV and worked on several programs in her capacity as reporter and anchor. Ambika turned to fashion and wedding-related programming in 2007 and joined NDTV’s lifestyle channel. On NDTV Good Times She worked on a series of hit programs like The Big Fat Indian Wedding, 10 Things To Do Before You Say Bye, Vanity No Apologies, The Inside Story, and I’m Too Sexy For My Shoes. Ambika won various awards for her anchoring.

Anjana Om Kashyap is an Indian journalist and anchor at popular Hindi News Channel Aaj Tak. She is also an executive editor of the channel. Anjana is best known for her show Halla Boll and Special Report on Aaj Tak. She was born on 12 June 1975 in Ranchi, Jharkhand.

Anjana completed her basic education in Ranchi and then moved to Delhi for her higher education. She has a Master’s degree in Social Work degree in Journalism. She prepared for UPSC Exams but failed to crack and joined Doordarshan in 2003 and started her anchoring carrier. Later she worked for various News channels including Zee News, News 24, and Star News.

Now She is executive editor of the Hindi News channel Aaj Tak. She holds a verified Twitter account with 2.63 Million followers.

Mini Menon is an award-winning journalist and anchor. She is currently the Co-Founder and Editor at Live History India. She was born on 11 July 1979 in Jammu, India.

Mini is currently the Co-Founder and Editor at Live History India. Her channel is covering all the related to the History of India. Live History India covers all the fascinating stories that make India. Mini Menon was formerly the Executive Editor of Bloomberg TV India, where she was in charge of news anchors and features shows. In 2013 she was adjudged as one of the 10 most influential women in Indian Marketing, Advertising and Media by Impact magazine and was also called a “popular face on Indian news television” by The Times of India.

Mini started her career in 2003 with Star Network as a news anchor, she has covered both political and business news. Now she is popular for covering Business topics.

Sweta Singh is an Indian Journalist and News anchor at Hindi news channel Aaj Tak. She is a news presenter and Executive Editor of Special Programming at Aaj Tak. She was born on 21 August 1977 in Patna, Bihar.

Sweta completed her education at Patna University and holds a degree in Mass Communication. She started her career in journalism when she was studying in Graduation. Sweta worked for various news channels like Zee News and Sahara before joining Aaj Tak in 2002. She is known for her expertise in Sports news.

The final member of our list of Glamorous Female Anchors in India is not just beautiful, she is hot too. Yes, I am talking about Archana Vijaya, the co-host of IPL season 4 and contestant of Khatro Ke Khiladi Season 6. Archana belongs to Kolkata, West Bengal.

Archana started her career as a model and won the Get Gorgeous contest in 2004 and hosted many shows as an anchor. She was also a participant in Jhalak Dikhla Jaa season 5 but won’t be able to make a big impact.

I hope I have covered the most popular female anchor in our country. If I missed someone please do mention them in the comment section below. Most of these anchors are part of Indian News channels. The above list shows us how women empowerment of women in our society, they are not just made for doing work at home. The above-listed women show us that you can make your impact with your powerful voice on Television. I hope you guys like this article, do share this and comment your views over this article in the comments. Thank You!

Don’t Forget to Share and Subscribe to our Newsletter for regular updates. Thank You so much for visiting us.