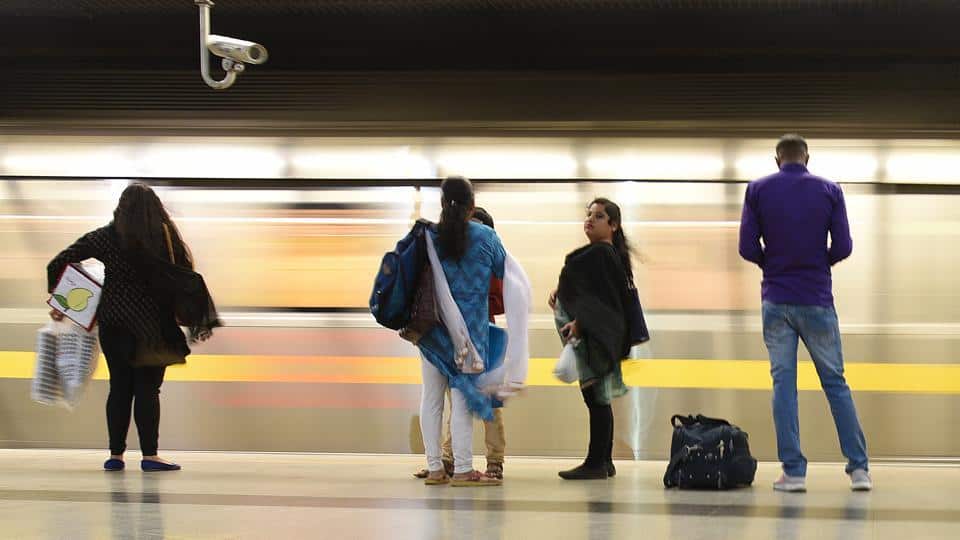 DMRC has collaborated with IHC to display the art at the station under dedicated panel for the Art in the metro initiative. The stations have regular exhibitions curated by India Habitat Centre. The ongoing exhibition at Mandi House is titled The City of Waste, which has on display 42 photographs by six French researchers, exploring the role of waste workers in society.

The station has a crafts gallery with over 58 panels displaying paintings and handloom by national award-winning painters, craftsmen, and artists from all over the country. The exhibits include Mithila paintings from Bihar, terracotta tiles from Rajasthan, Tanjore paintings from Tamil Nadu, fine straw work from Kerala and plethora painting from Gujarat.

The station is home to a unique gallery of craft maps, such as a shawl map of Srinagar, and a map made entirely out of terracotta stars. There are 48 craft maps covering all Indian states. Conceptualized by Dastkari Haat Samiti, a national association of Indian craftspeople, the maps also give information about the habits, art hubs and festivals of each state.

The Delhi Metro Museum at the Patel Chowk Metro Station showcases the genesis and history of the Delhi Metro, covering its all major milestones. Possibly the only museum in a functional Metro station worldwide, it has a rich display of photographs and models of the metro train, stations, etc; there are interactive pods that show videos and films on many technical aspects such as the working of the tunnel boring machines and segment launchers.

The station has well-stocked bookstores, one each by National Book Trust and The Sahitya Akademi. The Akademi bookstore, opened in 2016, called Sahitya Akademi Metro Bookshop, has hundreds of titles in over two dozen Indian languages. The shop has tastefully done interiors with have black and white pictures of Indian literary greats such as Toru Dutt, Devaki Nandan Khatri, and Nagarjuna, adorning the walls.

It is home to the Epicuria, perhaps Delhi’s first food mall that offers high-end café, bars fine-dining restaurants that attract people from all over Delhi. It a perfect place to connect with friends with some awesome food and drinks.